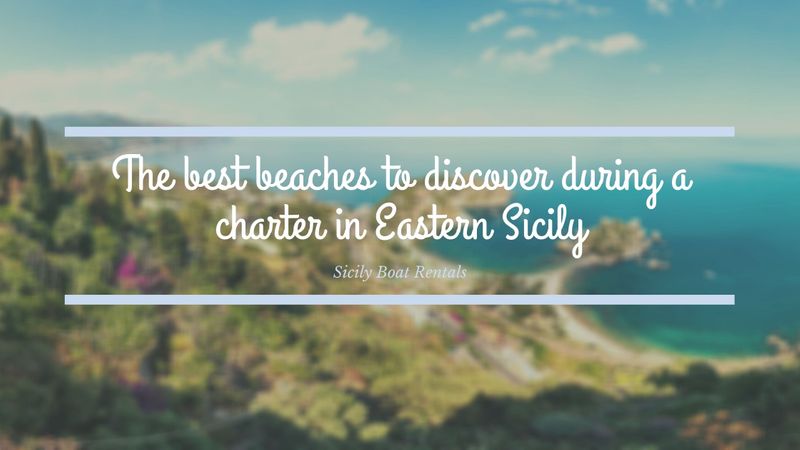 The best beaches to discover during a charter in Eastern Sicily

Let’s face it; Sicily is a magnificent island, a holiday is not enough to discover all the beauties of this island. We want to take you by the hand, or preferably by boat, to Sicily’s eastern part. We will show you the most beautiful beaches you can visit and admire during your eastern Sicily charter.

We suggest during your charter to dedicate a day to Giardini Naxos, here you will find beautiful beaches of international fame, with fine sand and several inlets as well as lava rocks that emerge from the sea. Anchor your boat and enjoy a luxurious landscape.

Mazzarò Beach One of the jewels of Sicily and Taormina. Set between two rock spurs covered with Mediterranean vegetation. Occupied mainly by private beaches. No obstacles for those arriving from the sea aboard a boat.

Among the most beautiful beaches of Taormina Mare, Isola Bella beach is in front of the homonymous island, which became a Nature Reserve in 1998, connected to the beach by a strip of sand that appears and disappears depending on the sea level. Here the water is clear and transparent.

Your charter continues to Syracuse. One of the most beautiful beaches is the Isola delle Correnti. This stretch of coast is a natural paradise, ideal for those who love surfing and contact with nature. The island and its beach are perennially beaten by the wind and currents and very rich in poultry fauna.

About 10 km from Syracuse, the Arenella beach is one of the most popular and appreciated on Sicily’s eastern coast. It is characterized by fine golden sand and is also accessible for the disabled.

The most beautiful beaches of Ragusa

The beach of Cava d’Aliga is part of the homonymous hamlet in the municipality of Scicli. It is a mainly rocky stretch of coast, interspersed with small beaches with crystal clear sea. Marine erosion has created exceptional scenarios, such as the Grotta dei Contrabbandieri. For snorkeling enthusiasts along the coast, there are some of the most evocative seabed of south-eastern Sicily: the area of ​​Punta Corvo and the Grotta dei Colombi.

During your charter in eastern Sicily, we suggest you spend several days in the Ragusa sea, here you can admire many enchanting beaches and alternate life on the sea with that on land. Allow yourself the luxury of walking in magnificent views, sometimes wild, you will also have the opportunity to savor the welcome that distinguishes Sicilians.

alamosche beach is located on the coast between Vendicari and Noto and is undoubtedly one of Italy’s most beautiful beaches. The bay is between two promontories, which is why the sea is always calm. Here you will find a true oasis of peace and relaxation.

Sicily Boat Rentals offers exclusive, customizable, and tailor-made charters, both on destinations and duration. Our best proposal is to visit Sicily’s eastern part in complete freedom, sailing in a spectacular sea. We recommend that you rent a boat with a skipper and crew on board for a unique experience.

How to book a boat rental service

Contact now our Charter Managers, who operate locally and are available 24/7, to organize every detail of your holiday in eastern Sicily, from the yacht’s selection to the itinerary, assistance with transfers, food, and any required service.